This page is all about Punjab Province of Pakistan. In this page you will find information about Punjab , its people cities and culture .We have gather all kind of useful information and facts about Punjab. Punjab is the biggest province of Pakistan by population and second largest province by area after Balochistan. Punjab province is bordered by Sindh to the south, the province of Balochistan to the southwest, the province of Khyber Pakhtunkhwa to the west, and the Islamabad Capital Territory and Azad Kashmir in the north. Punjab borders Jammu and Kashmir in the north, and the Indian states of Punjab and Rajasthan to the east.

Facts About Soba Punjab of Pakistan

Punjab is the most populous province of Pakistan and is the lifeline of Pakistan. The land of 5 rivers, population-wise the largest, and once known as the granary of east. Punjab economy is mainly agricultural, although industry makes a substantial contribution. It contributes about 68% to the annual food grain production in the country. 51 million acres of land is cultivated and another 9.05 million acres are lying as cultivable waste in different parts of the province. 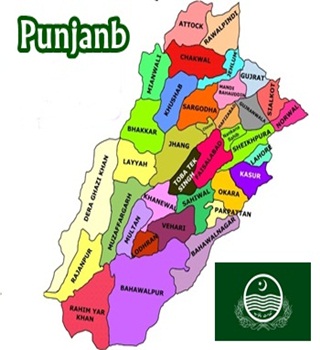