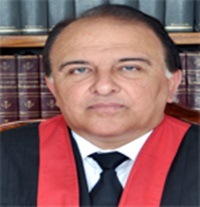 He received his matriculation certificate from Cadet College Kohat and and Higher Secondary School Certificate from Islamia College Peshawar.  He obtained Bachelor of Science Degree from Islamia College Peshawar and LL.B Degree from Khyber Law College Peshawar . He done master in Political Science from University of Peshawar in 1987 and He done master in Journalism from University of Peshawar in 1991. Justice Qaisar Rashid Khan started his professional career in December 1984 when he was enrolled as an advocate in the lower courts., He enrolled as an Advocate of the High Court in 1991 and as an Advocate of the Supreme Court of Pakistan in 2008. He also worked as an Additional Advocate General, Khyber Pakhtunkhwa from 17th March, 2008 till resignation on March 25, 2010.